Do you handwrite at all? Prefer it?

Or are you exclusively a typing writer? 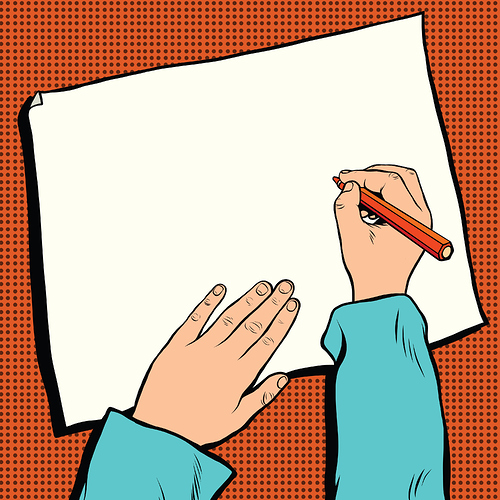 Excellent question. When I wrote the first draft, I typed it straight into Scrivener.
Now that I’ve started revisions, I’ve found writing by hand is useful for working on the many problems in the first draft. I work more slowly and carefully when I write by hand.

Typing, usually, because it is faster. If concentrating. With one big exception: getting Vitamin D naturally means getting out into the sunshine (scientists are realising more and more how important Vit D is to maintaining good health – very important in these days of COVID). Although I did try to type on my laptop outside in the early days, I quickly realised it really doesn’t work – too glary, difficult to avoid reflections and squinting all the time is very bad! So, I bought a spiral bound notebook and there I was, back to scribbling while getting my Vit D and, guess what? I love it. Why? Because writing longhand means I am not tempted to do any editing. My first draft of whatever scene I am writing is being put down as it comes to mind. Later, inside, I transpose the handwritten scene into the computer with my head in editing mode and all those double uses of words or phrases, those unwanted commas and those awkward run-on sentences can be fixed as I type. In my humble opinion, the double process does not take any longer than typing and getting sucked into editing as I go. Or really be focused and just blat it out without editing - what I am trying to do right now on this cloudy early morning…

I never use handwriting to draft my actual story but I do handwrite my scene notecards and to scribble ideas into a notebook.

I generally only handwrite outlines and initial notes, but I’ve been known to write out a scene longhand if I want a change of pace/scenery, etc.

Hand written outlines, beats, and often dialog. I have a small notebook I carry everywhere, a la Gaiman. And, I keep a notepad handy while drafting through to the very end.

I used to always handwrite all first drafts on yellow legal pads, and then edit them as I typed them up. After I grew more accustomed to a computer rather than a typewriter or my word processor, I slowly shifted from handwriting entire stories to just jotting down notes and ideas as they came to me. It can sometimes be more efficient to write directly onto the computer, but I feel like something got lost along the way.

I handwrite everything and then do mini rewrites while I’m typing it into Word. It’s a weird habit I picked up in college.

I’m a bit of an odd one. I don’t tend to write on paper as my handwriting isn’t the best from me writing too quickly. That said, I find it very slow for me to type on a keyboard as I’m constantly glancing down at the keys. The easiest place for me to do any form of writing is on my phone of all places, but that’s visual impairment for you. Having everything on the same line of sight and not having to peer at a keyboard or decipher my own scribbles is a godsend.

I know I read somewhere that there is a link between handwriting and creativity …but I use my ipad☺️. I did start handwriting to see if I was more creative, and the jury is out on that. What I did find was that I didn’t edit every two minutes, which was a bonus but… as I got more into the writing session, my hand couldn’t keep up, so later, I couldn’t actually tell what I’d written🤪

I know there’s apparently a link between messy handwriting and how smart someone is. Simply put, the hand can’t keep up with the brain

my old English teacher would write in block capitals during class, but his comments on assignments were impossible to read.

I only handwrite my drafts and ideas. I usually carry a notebook with me wherever I go and if a story idea comes to mind then I quickly jot it down. Other than that, I prefer typing

I handwrite notes when I am learning something new because I can use the whole page more freely to quickly draw lines or figures or side notes and reference things earlier on the page much more quickly to make connections.

When drafting or writing out my own thoughts, my handwriting is WAY TOO SLOW to keep up. I am a speedy touch typist and even typing can slow me down composing. I have been frustrated more than once by trying to get one part of an idea down and somehow lose track of where I was going because I couldn’t keep up with the thoughts racing ahead in my mind.

I would try dictation but for some reason I feel subjectively more creative when the writing comes through my fingers than by speaking my thoughts.

I handwrite when I’m stuck. If I’ve got an idea for a scene but it’s not working, I’ll freewrite everything I know to be true about the scene, the things I want to have happen, how each of the characters feel, etc. till I can figure out the best way to approach it. Once that’s done, I can go back to drafting which I do at my computer.

The greatest gift of college must be the quirks we carry and persist. . .

I romanticize the thought of handwriting on paper. I picture myself writing perfect cursive in a notebook with thoughtful ideas.

In reality, i can never read what I write, partly because I tend to overthink and edit as I write, then lose my thought of where I was going.

I prefer typing for the different devices and formats possible. I type in Google docs. Fornat in Scrivner. Speech to text while driving. Chart in Google sheets. Take notes on a phone app or google keep… or an occasional J K. Rowling napkin if nothing electronic is handy.

@Saragflee Sometimes I struggle to read some of my handwritten notes–especially if I haven’t seen them in a while. This is a pic of some of the notes I did for a short story I wrote a couple months ago, and it’s by far not the worst example I have of my chicken scratch… 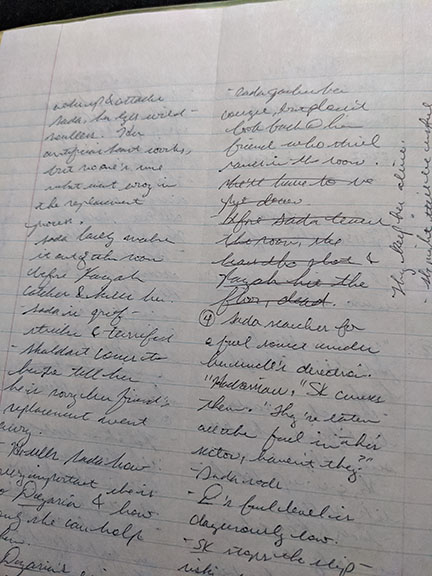 I do a bit of both. Up to and through most of college I was almost exclusively a handwritten style writer. I still have the hordes of composition notebooks with my uncounted number of drafts and edits in the margins. There’s something relaxing about the slower pace it takes to do longhand writing. It gives you time to think as you go.

It was probably because I started take notes in class with my laptop, but during college I slowly transitioned to writing more on the computer. It was certainly faster and once I had a phone with a Word program that could sync with my computer, well…I was fast becoming a better typist than longhand writer.

I still carry a notebook with me wherever I go, but I remember when it would take me only a month or two to fill one of those while now I can go half a year before filling a hardcopy notebook. When I have a phone that has all the typing and memory capability of a computer it makes collecting my notes that much easier.

I used to write in longhand. I loved it every scene I wrote I could see and hear everything like i was watching it enfold on a screen. Then, because my wrist had started acting up and I would get a headache if I wrote for too long, I got a computer. It was like a thick pain of glass came between me and my characters. I have gotten used to it over the years I’ve been using one because to not write is to not be happy.