Tell me about the person you (or your protagonist) meet (s) here. 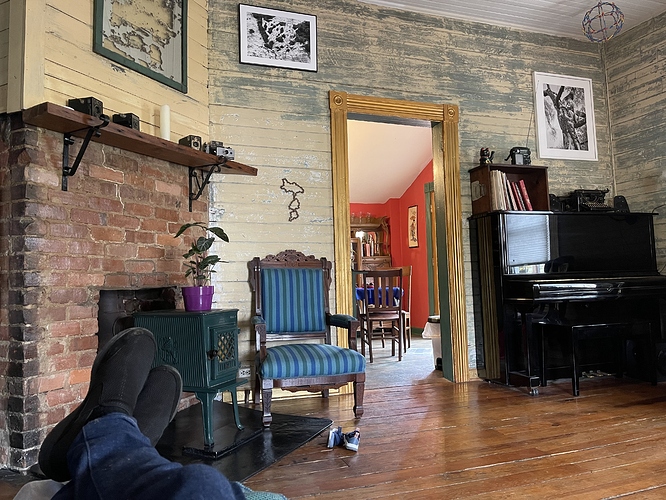 Tilde left me in the parlor. The preacher’s parlor it would’ve been called in her childhood. While the years had pushed on it, the gentle decay was genuine and borne of use, probably good use, by a family large and vibrant. Even the old upright looked well-tickled.
“You still play, Auntie?” Tilde was no more my aunt by relations than I her neighbor’s kin. But she’d insisted when we first met the week before last I call her Tilde. “The piano, that is.”
“Oh, no,” she said expressively. “I’ve never had the patience to learn, nor the ambition to sit for more than a minute to finish a piece. That was Waynan’s. And, he could play. I tell you what.”
I heard noises from the kitchen associated with the making of tea, then another confession. “I’m sorry about the milk. I haven’t got any. Will that be alright?”
“Of course. Indeed . . . you needn’t have gone to that trouble, in the first place.”
“I couldn’t exactly ask you over to look at all my junk without offering a biscuit and coffee, now could I?”
People did it all the time. I was enjoying her company more than I’d thought I would.
“Tilde?”
She was there, in the threshold dabbing her hands on a towel.
“I so sorry, love.” I went on. “You almost put my heart in me throat.” She smiled. I looked about just to be sure no crew waiting about ready to jump and shout, Surprise! You’re on Hidden Camera. There wasn’t. “These books. Where are they? You said they were your husband’s, right?”
“Oh, no. Not his. 'Is brother’s.” She stepped into the room still worrying the towel. “Over here. Not a whole lot. But they’re quite lovely. The bindings alone must be worth something.” She touched a carton squared to a small, marble-topped sewing table, then lifted back one flap with a single finger.
It may have been the notion of something mysterious, but for the fleetest moment, I might have sworn without a second thought the whole room had been brushed by a chill. When I peered into the box, such imaginings were dispelled utterly.
“Is this what you were hoping to find, Mr. Wallace?”

I like it! Although not sure I should be a character

Or is it just a character with the same surname as you? Self-insertion or intended reference?

My character, a 12 year old girl named Erin, meets her singing teacher here - it is his house, and it smells of boiled cabbage, wet cats. Mr Whalen is old. Not ancient. But sort of worn out. His wife’s gone funny in the head, you see. She’s always sneaking out of the house in her nightie, and goes wandering all over the place until someone brings her home. Everyone knows her. Mum said Mrs Whalen used to be a famous singer on the stage in London, and she once sang for the Queen! And now she’s plain barmy, but I always feel so sad when I see her. She’s the reason I keep coming to my singing lessons with Mr. Whalen. I’m not ever going to be singer, but Mr. Whalen needs the money real bad nowadays. He had to give up his job in the city to stay home and look after Mrs. Whalen. So now he teaches kids like me singing or piano.
He’s a very kind man, and a gentleman too. But he always looks sad these days.

Ah, but you are . . . As long as the books aren’t read after midnight, in the shadow of an oak, near a iron vessel, or upon a path leading to sacred ground - yeah, that one covers a lot, but a path with no forks or turns to the north - you’ll be just fine.

I don’t think I gave it much thought. I needed a character’s name with similar meter, sound, so forth

When Lane got Vic’s letter in the mail, he wasn’t sure he should open it. Her funeral had been two years ago.

Curiosity overrode caution, and he tugged out the twice-folded stationery.

If Vic had arranged for him to get this now, it was for a reason. She always had an uncanny sense of timing.

When he parallel parked his blue Versa in front of the single-story ranch-style house, no one gave him a second look. A mom jogging behind a stroller smiled and waved, and two kids tossed a Frisbee for their golden retriever to chase.

Lane double-checked the address and knocked.

A man in his late seventies answered the door. He noted the paper in Lane’s hand. “Come on in. I’m Sam Dersch, and unless my eyes have gotten worse, you’re Lane Harris.”

Sam chuckled, and kind eyes smiled behind thick glasses. “I’m Vic’s trustee. She didn’t want her parents to have to shoulder that responsibility, and her kids are too little. She had me mail these letters beginning of the week. You’re the first to arrive.”

“But… two years after her death?”

“She left almost everything to her family, but she wanted to make sure things had settled–keep greedy pseudo-relatives out of the picture.” Sam beckoned Lane into a well-lit study.

A black, upright piano sat in one corner opposite a brick fireplace. Art prints and photos–all in black and white–hung on the walls, and a curious, hollow globe made of colored plastic straws dangled above the piano bench.

“Have a seat.” Sam swept an arm in the general direction of three chairs, upholstered in varying colors, but each one somehow matched the decor.

From a small desk by the window, Sam took a plain brown box. He handed it to Lane.

“She wanted you to have this.” Sam’s eyes misted. “It was one of her most loved possessions.”

Sam raised a hand. “She said you’d try to turn it down. She also said to tell you you’re one of two people who knows what this story really means.”

Sam sat, hands folded, elbows propped on both knees. “Because I’ve got thirty five years less than you. This story deserves to be told, Lane Harris. And Vic picked you to do it.”

Another knock cut the conversation short.

“That’ll be another beneficiary.” Sam stood and dabbed his eyes dry. “I’m sure I’ll see you again.”

Lane carefully repacked the book and cradled the box as he got back in his Versa.

“Hello, I’m Sam Dersch,” the old man smiled at the next of Vic’s beneficiaries as Lane left the quiet neighborhood.