The Jar of Nouns. A Fun Writing Prompt!

You can get help with this part if you like.

Cut up a sheet of paper in several two by three inches pieces.

On one side of the paper pieces, write a noun (some can be proper) just make them random, and place them in the jar.

Then repeat the process with all the paper until your jar is loosely full.
(I choose my nouns roulette-style from the dictionary or Shakespear to work into modern-day sentences)

For an on-the-fly writing prompt, pull 5 nouns from the jar, and write for 15 minutes using all 5 nouns.

Remember you can refresh your jar’s nouns as often as you like.

(or sans jar, do this with a stack of 3x5 cards, shuffle and choose 5 at random)

For an extra challenge, reveal only one noun at a time and write in the order they appear.

Pssst…Doing this prompt with a group of writers that all contribute to the noun selection, becomes a laugh-out-loud hilarious game when you hear what people come up with. The varied contributions build more challenging and diverse writing prompts.

Make one as a personalized gift for the other writer in your life. Use any container you like, and have fun with it!

This is how I create writing prompts for myself, only I use descriptive verbs, i.e., splintered, crinkled, sauntered, floated, etc. Verbs work better for me because they help me visualize tone and atmosphere. It’s a great exercise to spark impromptu writing.

Kelly, I like that! (I’m going to need more jars)

only I use descriptive verbs, i.e., splintered, crinkled, sauntered, floated, etc. Verbs work better for me because they help me visualize tone and atmosphere.

This is an interesting idea, and I like your suggestion, @DeAnna, of making one for a fellow writer (which I might do for Christmas for the one other writer I know personally). She loves crafty stuff, and I think she would appreciate this.

I actually don’t use prompts. At least, not like this. From the moment I picked up a pen, I’ve never been projectless. Usually, I have at least two or three projects going at once. Right now, I’m working on four (one original novel, two fanfic novels, and a fanfic short story collection) and contemplating a second and third original novel.

I do love good nouns–and verbs as @kellygunteratlas suggested. When I was in upper elementary and junior high, I kept a notebook where I wrote down all the great words I came across at school. Come to think of it, I need to go find that and digitize it.

I do love good nouns–and verbs as @kellygunteratlas suggested. When I was in upper elementary and junior high, I kept a notebook where I wrote down all the great words I came across at school.

I miss early school days and giant dictionaries for that exact reason.

My bit of a bully older brother used to call me name’s that I didn’t understand but I just knew were supposed to be bad, like “asbestos” and “Quasimodo”.

Personally I think he just liked the sound of the words he hadn’t thought deeply on them, but I did. I looked for the greater meaning, literal or implied in everything projected at me for a sense of understanding.

Later when I heard on the news “asbestos was dangerous and harming children in schools” I was decidedly then to prepare for a battle of wits he would rue the day he inspired.

Each vocabulary assignment I would read the dictionary’s pages all around the assigned words and store away in my arsenal the best ones to confound my brother.

Our ability to insult one another on greater levels became quite the aspiring game between us.

Perhaps the way some folks like to play bigger better practical jokes on one another, we lobbed words.

I can’t say I liked insulting him (or anyone), but finding the words, names and their meaning was glorious. I do believe in respectful self defense, and I liked being able to end the battle with his lack of ability to retort.

Soon I was reading anything I could get my hands on that looked to be of some intelligence that I could use for source materials to confound my brother.

I believe calling him, Lord Carnarvon https://www.mentalfloss.com/article/23321/victims-king-tuts-curse was one of my favorites.

I could hardly wait for my superstitious brother to slink back to his lair and research the Earl that funded the disruption of King Tut’s Tomb.

I hope his understanding was even half as sweet as his victory the day I understood Quasimodo!!!

As the others looked back toward the pursuit, Yari stared at the second group of riders approaching from the North.

“The horses need rest,” Ledran called from the rear, ever the practical quartermaster.

No sooner they passed beyond the New Republic’s border, the lawlessness of the Lands Beyond became all too real.

“Not going to happen,” Mikailut replied, pointing to the second group ahead with his right arm, awkwardly bent since the duelling injury. His size, his dark-red studded brigandine, and the imposing hand-and-a-half blade at his hip, might deter half the assailants. Yari witnessed first-hand how fiercely the old Viper fought. With or without his steel armour, mindful of his damaged arm and leg, on horseback Mikailut was worth a dozen.

“Why the hell did I agree to this journey?” Ledran asked.

“They’re called orders, Lyo,” Risto teased. “Your father was a general. You should know how it works.”

The Corsair’s blackest humour came out at times like this. Since discovering her mother’s name on a manifest, the journey to Blackmoor Gate was her obsession. Risto Tallas, with her blades and knives and Corsair’s curses, wasn’t about to let a bunch of bandits stop her.

Yari needed to reach the mine workings to find her father. Nothing else mattered.

Yari made a count of the new threat. Eight or nine behind, now six more in front. She needed one of the three to come up with a plan. Mikailut, the veteran; Risto the thief and gambler; Ledran the steadfast young soldier who had run with the Regulators after the war.

Too young to fight, but blessed by the Council, Yari remained, somehow, in charge.

Risto hated Mikailut for his time with the old Emperor; Ledran resented Risto for whatever secret of the Emperor’s death she kept between them; Mikailut regarded them both as weak-willed mercy-peddlers. In truth, Risto came from a line of pirates, while Ledran knew what it was to stand in line on the battlefield as a cadet.

“What do we do?” Yari yelled as they brought the horses to a halt.

“Perhaps Mikailut can keep a couple as pets?” Risto suggested unhelpfully, taking her short bow from behind the saddle.

Mikailut glared as he yanked back the string of his crossbow with his good left arm, his right foot through the stirrup ring.

Ledran sighed with resignation. No stranger to violence, it was never his first resort.

Yari, too, had seen plenty during the Emperor’s reign. It cut short her childhood, stole away her father amongst the Vanished. A bloody exchange with bandits came as a risk, at best a delay, and not one she entertained.

“Can’t we bluff it out? Say we represent the Freedom Council? Offer them a pardon, now the Emperor is gone?”

“I doubt they’re much interested in politics,” Ledran answered, fitting the slim wooden box to the centre of his own longbow, becoming his own corps of archers.

Yari looked at the three of them grouped around her, calmly preparing for the encounter; guile, ferocity, invention. They didn’t need a plan. No plan survived engagement with the enemy. They would improvise.

She gripped the long knife under her cloak and for the briefest moment felt sorry for the bandits.

Okay, I went over the prompt time to do some edits this evening.

And fantasy is my genre. Deal with it.

I didn’t have time to mess with jars, so I pulled from some random noun generators online. One of them gave me a default random word on opening which happened to be MY OWN NAME (cue spooky music).

I used those in sequence for the story.

I’ve saved them for a frustrating day when I need some creative relief and can sit down and blitz a short story.

Okay, I went over the prompt time to do some edits this evening.

And fantasy is my genre. Deal with it.

I didn’t have time to mess with jars, so I pulled from some random noun generators online. One of them gave me a default random word on opening which happened to be MY OWN NAME (cue spooky music).

Never apologize for additional content, we love it here.

Can you share links or sites for generators for folks to check them?

That is spooky, perhaps serendipitous, even.

The one I used for the prompt: 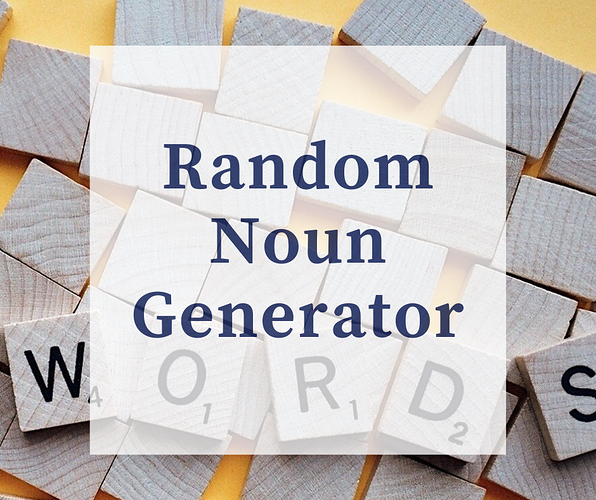 Our free random noun generator generates 1000+ random nouns that you can create for games, lists, and more. Just click the button to start.

and the other two: 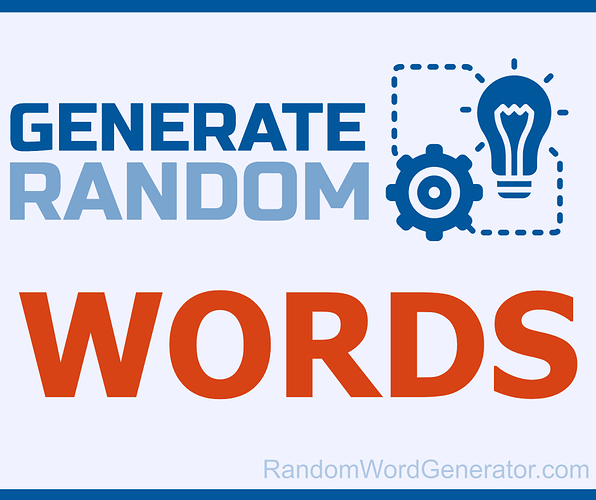